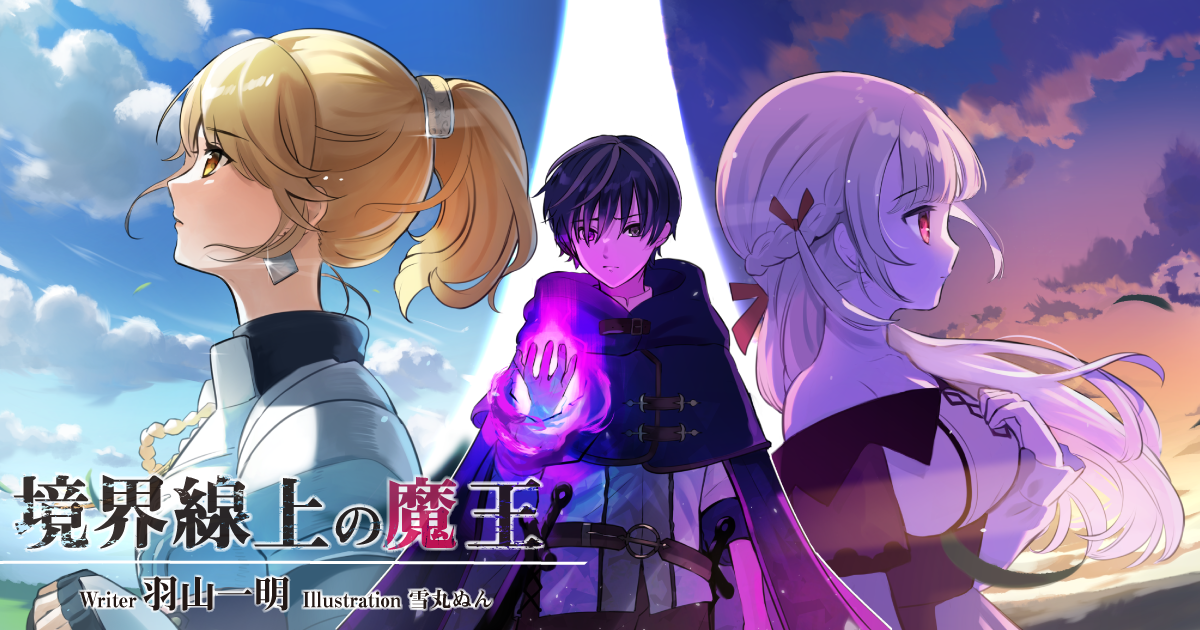 Your Majesty, the King

The clouds are high in the sky and the flowers and grasses are turning from green and yellow to golden, indicating the arrival of a new season.

In the midst of such cheerfulness, I, Sage Luxuria, stand shoulder to shoulder with Lady Christia in the sky…

“I know! Let’s attack it together!”

Over the sky, the holy knight candidates were engaged in endless battles and we solemnly serve as surveillance over them.

“What did you say, Maou-sama?”

“…… Excuse me. I was asking myself if I still had my human emotions intact.”

“You don’t look well. Why don’t you take a break?”

Chris spun around in the air and leaned in close to me. I still felt embarrassed to be called the Maou sama, so I forced myself to look at her and escape the difficulty.

I muttered something that may or may not have been an answer and looked up at the swaying autumn Clouds with a grudge.

A short sigh unknowingly spilled as a scream was heard under the beautiful colorful sky.

—–It all started last month. It goes back to the audience at the Fermina royal castle.

Lefilia, who was dressed in light clothes, made a dumbfounded voice and a matching expression. In the rear entryway, Leon, Chris, Sage and Marie were standing there, looking surprised but convinced.

“Umu. This time, Miss Frostline is not at fault. However, it wouldn’t have been easy for Lurain to back down. Because you arbitrarily forced the operation around the border and failed and made our country wipe it.”

It’s not that she doesn’t understand the situation, it’s that she’s confused. While opening and closing her mouth, she tries to appeal by gesturing.

“By enrolling a holy knight from Lurain, you’re expected to solve the problems that originated from the dissatisfaction on that side, like this time, right?”

When Leon stepped forward and spoke, the king nodded heavily with a difficult expression.

“That’s right! So I want Miss Frostline to take part in the holy knight qualification exam next month. I’m quite certain Lurain will be satisfied as long as they have a qualified holy knight.”

“After that, well, I guess there’s also Sage that has returned.”

Sage who was standing upright with the air of not being involved stuck to his whole body, got surprised and stiffened his shoulders and elbows.

“Umu… it would be even more frustrating for Lurain to learn that Christia, an active holy knight and the former holy knight has made a triumphant return.”

“Then it would be better for me to disappear to his land …….”

The weak voice was cut off by the king’s big smile. I felt something similar to Leon’s skillfully pasted smile that I had seen so many times in the past.

“Wait a minute, Sage. Did anyone know who you were before you came here?”

In the first place, he had planned to hand the sword he had been given to Chris and leave as quickly as possible. If he wanted to reveal his true identity in front of the public, the festival-loving Fermina is already a hassle that should be avoided. Instead of leaving, they might even start a triumphant parade the next day.

That’s why he borrowed some bad taste armor and a sword from Falmer and called himself the “Madou-sama” (Magic King) with fire coming out of his face.

“Alright. Then, the holy knight Sage has not returned to the world of humans.”

The king lifted his head from his throne. When he walked up to Sage as it was, he held up the helmet that was set aside while saying it was in bad taste and put it on Sage’s head, who was stunned.

“To subdue the monster that emerged from the border, Madou-sama of his land and the heroes of the human world united.”

When the king spoke with the voice and tone of an actor, Leon, who was trembling while holding his sides, spewed out irresistibly. It was only after he had said that much that Sage understood the role that would be assigned to him.

“When you have made up your mind to return home as Sage Luxuria, you may remove your armor. Until then, you will fulfill your duties as a swordsman who has come from his land.”

“Just because you don’t want people to know who you are doesn’t mean I won’t force you to do your job. I’m looking forward to working with you, Mado…….”

Leon who interrupted while casting a bitter smile, tilted his head to the words he uttered.

“Madou-sama is a better set up. Let’s do that.”

In order to stop the conversation that was going in a suspicious direction, Sage stepped forward. There was a hand that grabbed Sage’s arm as if to hold him back. He turned around and saw Chris, who looked like a knight, staring at him as if she was about to burst into tears.

The king and Leon continue talking about the prospects for the country, as if Sage is already involved.

“Well, for starters, thanks for the hard work.”

In the meantime, Marie gently consoled Lefilia, who had lost her way looking in the distance.

…..For the next two weeks, the time when there was nothing to do with the mayhem or swordsman passed by in a hurry.

In order to conduct the qualification examination for the holy knight, the approval of the lords of the nations, or the king, is required. Sage’s renewed Madou-sama title and his party flew to Lurain with a letter written by king Fermina.

“Everything is going smoothly.”

Upon reading King Fermina’s letter, which was handed to Leon, King Lurain slightly distorted his wrinkled expression and regretfully signed the letter.

“I’m sure the situation is very serious for Leonhard to take the brunt of it.”

The King of Lurain held out the letter to Leon, saying that it was unavoidable. Leon lowered his eyes to the document with a questioning look, opened and closed his mouth by visually recognizing his name engraved on it. As if to override his spinning thoughts, he was reminded of his father’s odious expression when he sent him off.

Leon quietly listened to the facts stated by King Lurain and after leaving the palace, he smiled bitterly and collapsed on his knees the next moment.